How to feel comfortable talking about "difference"

In the continuation of our Virtual Lunch series in collaboration with LexisNexis and Crafty Counsel this week’s lunch challenged the topic of being comfortable talking about difference. Hosted by our very own Sophie Gould, Head of Learning & Development here at F-LEX, we were delighted to welcome Chris White from Aspiring Solicitors, as well as hearing from both Louisa Van Eden-Smit from LexisNexis and Ben White from Crafty Counsel.

What do we mean by difference? 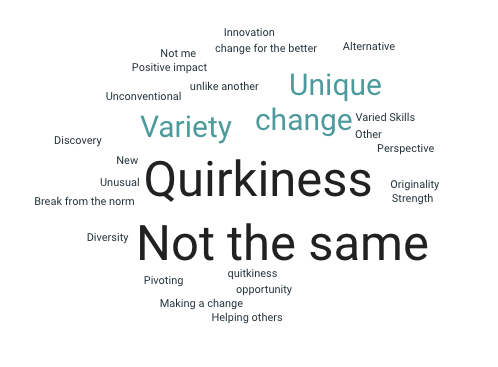 Using an interactive Word Cloud we asked our attendees what the word difference meant to them. You can see that we got a very varied response with the two outstanding answers being “not the same” and “quirkiness”. What was pleasing to see was the amount of positive connotations that people associated with the word, which has traditionally been viewed as a negative.

Louisa Van Eden-Smit from LexisNexis talked about their view on diversity and several of their initiatives in the wake of the Black Lives Matter Movement.

LexisNexis have been thinking differently about diversity since the release of the Parker Review Report in February, which found that 37% of FTSE 100 companies have no ethnic minority representation on their boards. For LexisNexis this shows the shift towards a more holistic view of diversity and inclusion that is starting to expand beyond the gender pay gap issue.

During the pandemic, the LexisNexis leadership made themselves available for broad conferencing. Originally starting with how they were handling the pandemic, in the wake of the BLM movement, the sessions morphed into a Q&A. Issues such as the need for transparency and openness were discussed.

As a result, volunteer’s within the company set up action groups, whose aims were to look at diversity across the organisation. Subsequently they ran  a number of round tables throughout the company, providing the platform for people to talk openly about the issues in their mind and perspectives. This enabled the volunteer group to develop an Action Charter which they hope to publish soon. The firm already publishes a survey on gender inequality and the hope is to widen and develop the scope of this to provide a more holistic view on diversity and inclusion which they can build on year on year.

Ben White from Crafty Counsel shared with us how his firm have sought to respond to the current social climate and the lessons they have learnt.

In the wave of reaction to the BLM protests in the UK, Crafty Counsel saw that a lot of firms were posting Black Squares on their social media. They wondered whether such sentiment would be followed up by further action or whether it would fall away, so they decided not to post a black square.

Instead they wanted to do more. In a previous project they had interviewed four senior female black lawyers about their journey in law. Ben’s first reaction was to reach out to them to do another interview one year on.

However, they said that at this point they had no more to say and that just talking was not instructive. It caused Ben to reflect on his own thoughts and to realise that the conversation needs to be taken onto a different path and to potentially think thematically about the challenges faced by lawyers from other backgrounds to his own and to seek out new conversations rather than repeating what has already been said.

Ben felt that his experience was pertinent to share with the group as he felt it highlighted some of the challenges that a small company faces in getting a response right. What he found is that empathy and trying to learn through this process is key.

Chris White joined us to talk about the importance of finding positivity in difference.

Chris is a firm believer that difference is nothing but a positive. He went on to explain that we must realise that everyone of us is different and that there are others and organisations that want to benefit from these differences.

But despite this, we must be pleased about our differences and try to understand them so we can learn how to progress in our careers.

This was an incredibly thought provoking topic, with the speakers highlighting what companies are doing to combat the issue, the challenges they face and the need to learn and appreciate our differences.

For further reading on the benefits of differences in people I would wholeheartedly suggest reading Matthew Syed’s “Rebel Ideas”.