Cryptocurrencies: an overview of the risks and the regulations

What is meant by cryptocurrency and what are the current challenges facing the market?

“Cryptocurrency” describes the digital system (“crypto”) where transactions within a system of money (“currency”) are recorded on an open and distributed ledger, called the “blockchain”. Unlike fiat currencies\[1\], the ledger used is not backed up by banks, any physical asset, or credit of any government or business. Instead, it is monitored on a collective, consensus-based system based only on the confidence of the users. In other words, it is totally decentralised.

The blockchain technology is an essential component of cryptocurrencies as it allows transactions to be permanent and tamper-proof once recorded. How this works is that ownership of a particular cryptocurrency unit, such as one Bitcoin, represents access to a unique digital address stored on the blockchain ledger. These addresses are essentially the answer to complex mathematical problems solved by super computers called “miners”. When a user purchases a Bitcoin, they buy the “key” to access the address, keeping transactions anonymous and transparent.\[2\] Essentially, the value in cryptocurrencies lies in each unit’s unique digital information.

Cryptocurrencies were designed to compete directly with centralised banks. A distributed ledger negates the need for fees, increases efficiency, bypasses established systems of regulatory governance, and ultimately protects against the potential for corruption and risk that comes with centralising information. 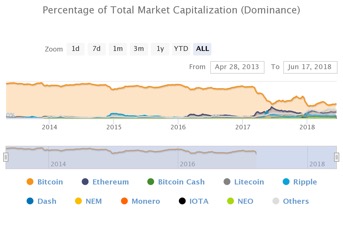 Despite its nascence, interest in cryptocurrency trading shows no signs of slowing down. Eighty out of 400 finance firms are considering trading in cryptocurrencies within the next year, according to a poll by Thomson Reuters\[6\], and initial coin offerings (ICOs) are growing in exponential popularity as a fundraising method, increasing by 30% since 2017.

What are the current challenges facing the market?

Given the consumer hype, it is clear cryptocurrency usage is too big to ignore. Yet the adoption of cryptocurrencies by governments globally has been inconsistent, as is best shown by the heat-map in Figure 3 below. Only 14 nations are actively promoting cryptocurrencies, whilst 12 countries have taken steps to curtail or ban them outright, demonstrating the difficulty regulators are experiencing in approaching cryptocurrencies, and ultimately dictating their legal trading success. 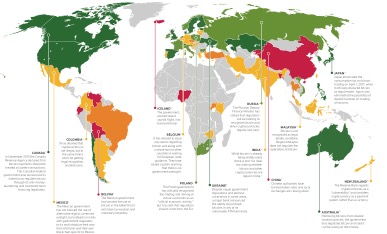 The first main challenge for regulators is anti-money laundering (AML) and combating the financing of terrorism (CFT). Has the rise of cryptocurrencies allowed some AML/CFT measures, for example know-your-customer standards, to be evaded? Is the anonymity behind cryptocurrencies being exploited to avoid capital controls or taxes? Most worryingly, are illegal transactions taking place via cryptocurrency exchanges? Bitcoin’s strong market reaction to the wholesale shutdown of Silk Road, an online marketplace where consumers could buy anything from drugs to hitmen, suggests a non-negligible segment of the demand for cryptocurrencies arose from illicit activity, at least at that time.

Most recently, Google, YouTube and Facebook have banned advertisements that service cryptocurrencies.\[9\] Meanwhile, no major UK high street or online retailer accepts cryptocurrencies as payment.\[10\] Clearly, at this early stage, the risks continue to outweigh the benefits for large financial institutions. 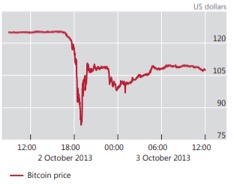 This leads to a second challenge faced by regulators. How should cryptocurrencies be legally defined? Can existing regulations apply or do revised regulations need to be drawn up?

One way that cryptocurrencies differ from fiat currencies is that they do not bear interest, meaning that investment does not result in profit unless the price goes up in value. So whilst Bitcoin, for example, has been successful in delivering profits for a large number of people, there has been a huge proliferation of cryptocurrencies across the board. Choosing to buy one type of cryptocurrency over another in this sector results in winners, but also equal and opposite losers. This kind of zero-sum activity defines gambling, unlike investing, which is supposed to be a positive sum game.

This is one of the many reasons why there is a big debate in the regulatory space in how to treat cryptocurrencies. Out of the top 10 jurisdictions with the highest number of cryptocurrency exchanges, each treat the currencies differently (see Figure 5). 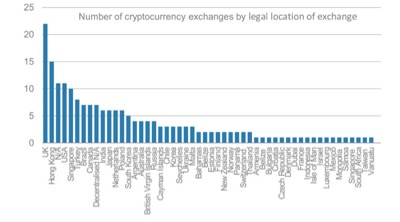 For example, in the UK there are over 20 cryptocurrency exchanges, which, although legal and are required to register with the Financial Conduct Authority (FCA) in order to meet the same AML/CFT standards as other financial institutions, remain unregulated. The cryptocurrencies themselves are treated as commodities, with VAT applied and capital gains tax charged, but the transactions themselves are so far also unregulated. Other crypto-related products are generally within the FCA’s regulatory perimeter, however. \[13\]

In the nine other jurisdictions with the most cryptocurrency exchanges, cryptocurrencies are classified on a broad spectrum as securities, commodities, assets, currencies, virtual currencies, or on their “own characteristics”. The variety of approaches shows that operationally, cryptocurrencies do not easily fit into existing frameworks. \[14\]

What are the risks posed by using cryptocurrencies and how may these risks be mitigated?

Cryptocurrencies are extremely sensitive to fluctuations, and as a result, are proving to be unreliable short-term stores of value.

The highest price for Bitcoin was $19,228.10 in December 2017, which has steadily decreased to $6,747.84 at the time of writing. This is its lowest price since April, the overall decline is being attributed to a sudden injection of liquidity on the part of longer-term users\[15\], whilst the intermittent troughs are market reactions to a broad range of external factors.\[16\] 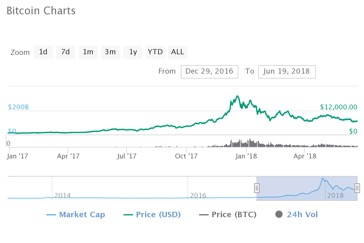 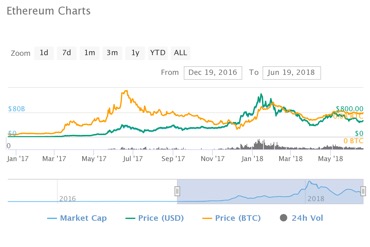 The main driver behind this volatility is market speculation, which is the primary use case for cryptocurrencies. The risk lies in the markets’ infrastructures, which are not backed-up externally, making them weak and vulnerable to systemic market manipulation by communication between longer-term users who are able to influence price.\[19\]

Whilst anonymity of transactions is one of the main beneficial features of cryptocurrencies, it is also a useful tool for the furtherance of criminal activities.

Money laundering is an obvious example of a criminal activity that abuses the infrastructure of cryptocurrencies. Europe’s policy agency, Europol, has estimated that £4 billion has been laundered in illegal money, which accounts for around 4% of all criminal proceeds in Europe. Not only is this figure is expected to increase, but the appropriate sanctions will be superfluous if regulations are not effectively enforced to fill in the loopholes in current AML regulations.\[20\]

In May 2018, the EU Council adopted the Fifth Anti-Money Laundering Directive (5MLD), which will bring cryptocurrency exchanges and custodian wallet providers within the scope of obligations to report suspicious activity and implement preventative measures, such as “know-you-customer” procedures. As “obliged entities,” cryptocurrency exchanges must comply with the same regulations as banks and other payment institutions. They will also be subject to requests from Financial Intelligence Units (FIUs) to obtain and use any information based on a suspicion of terrorist finance operations or money laundering. The regulation is the first of its kind to define a “cryptocurrency”, which should secure market integrity by carving out the appropriate level of investor protections.\[22\]

Given the prevalent contribution of cryptocurrencies to both of these crimes and the scope of the regulation itself (which covers 10 of the named jurisdictions in Figure 5), 5MLD is a crucial step forward in filling in the loopholes that allow cryptocurrency exchanges to escape legal obligations. The Bank of England is hopeful that by holding cryptocurrency exchanges to the same strict standards imposed on trade securities, a “major underlap in the regulatory approach” will now be addressed.\[23\]

The FATF has acknowledged however that in order to effectively tackle money laundering and its lack of regulation across jurisdictions globally, there needs to be consistent anti-money laundering (AML) guidance, particularly given the cross-border nature of cryptocurrency transactions.\[24\]

A second type of risk concerns the protection of consumers who use cryptocurrencies. A common problem in this area is digital theft or hacking. Given the size and unprecedented nature of distributed ledgers, and the length of time required to process transactions, many users access their cryptocurrency holdings through institutional third parties.\[25\] However, this comes with its own risks because many of these intermediaries are themselves unregulated.\[26\] Some of them have fallen victim to hacking attacks or have proven to be fraudulent themselves, resulting in 980,000 (worth about $4billion USD) Bitcoins being stolen to date. Mt. Gox, once the largest Bitcoin exchange, lost roughly 650,000 Bitcoins (that’s a third of the total number of stolen Bitcoins) when it filed for bankruptcy in 2014.\[27\]

The Japanese cryptocurrency exchange, Coincheck, fell victim to what the Financial Times has called “one of the world’s biggest heists,” when $500 million USDs worth of the cryptocurrency XEM was stolen earlier this year.\[28\] Only a year previous, the Japanese government brought Bitcoin exchanges under its federal AML regulations.\[29\] The hack goes to show that in this sector, where a different cryptocurrency seems to pop up every day, a scattergun approach to regulation can only afford so much protection for consumers.

What is needed, and this is widely recognised amongst global regulators, is a set of entirely new, tailored regulations and monitoring of cryptocurrencies. A recent communiqué from the G20 Finance Ministers and Central Bank Governors highlights this supranational commitment, and calls on the FATF to advance global implementation of applicable standards.\[30\]

\1\] Fiat currencies are paper or coin money that have no intrinsic value but are legal tender, e.g. the dollar and the euro

\3\] Will Hallett and Grace Chong, ‘Regulation in the Age of Cryptocurrencies’ (Regulation Asia, 3 May 2018) <https://www.regulationasia.com/regulation-age-cryptocurrencies/> accessed 18 June 2018

\14\] Kate Rooney, ‘Your guide to cryptocurrency regulations around the world and where they are headed’ (CNBC, 27 March 2018) <https://www.cnbc.com/2018/03/27/a-complete-guide-to-cyprocurrency-regulations-around-the-world.html> accessed 19 June 2018

\16\] For example, the hacking of the South Korean cryptocurrency exchange, Coinrail, in early June, and the announcement from UK banks in February of their consideration to ban customers from buying cryptocurrencies using their credit cards

\26\] 5MLD must be enforced by late 2019, but Member States are not obliged to implement the regulation before then.

Alex McAdam has just finished the LPC MSc at the University of Law in Bristol and is currently applying for training contracts. She is interested in how technology is affecting the legal profession both directly and indirectly.